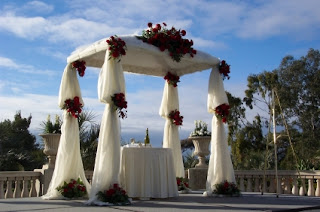 Whether you spell it chuppah, chupah, chupa, huppa, huppah, or hupa, it all refers to the wedding canopy.  The chuppah  represents a home that the new couple enter into for thenesuin aspect of the wedding ceremony. The chuppah may be constructed of a tallith or other cloth held spread over poles. The poles may be held by four people or mounted in place. It is the custom of some Sephardim and Yekkes (Jews of German extractions) to lay a tallith over the couple during the chuppah. That practice appears consistent with the view of chuppah being constituted by draping an article of clothing referred to in the section on badekin. When the chuppah used is a permanent structure, it is often decorated with floral arrangements. I haven’t seen an authoritative source referring to placing flowers on the chuppah, but it would fit with the wedding ceremony’s evocation of the experience of Israel at Mount Sinai.
The Sages learn from the verse vayithyatzvus bethachtith hahar (Exodus 19:17) describing the people of Israel as encamped at the foot of the mountain that they were , in fact , under the mountain: chapa aleyhem har kegigis [G-d held the mountain over their heads like a roof or canopy] (Tractate Shabbath 88a). Though the mountain was located in the desert, it is said to have miraculously bloomed with grass and flowers when it was honored as the place where the Torah was given. This Midrash, which I’ve found ascribed to Medrash Talpiyos Os Dodoim , is often quoted as the explanation for the custom of decorating the home and synagogue with flowers on the holiday of Shavuouth. But it is possible that decorating our chuppahs with flowers reminds us of the blossoming Mount Sinai at the wedding, as well.

The Mesader Kidushin recites the blessing on erusin while holding a cup of wine.  The cup of wine is then passed to the groom and bride, who each take a sip. This is followed by the kiddushin --the marriage bond, which is demonstrated by the groom giving something to his bride. It is a long-established custom to use a ring for the kiddushin
Related:
The Reason for the Ring